Stephen Gibson is the sixth generation of Gibson’s to farm near Hillsborough in Co Down. Stephen was a beef and sheep farmer up to 2012, before taking the plunge to get into dairy farming. 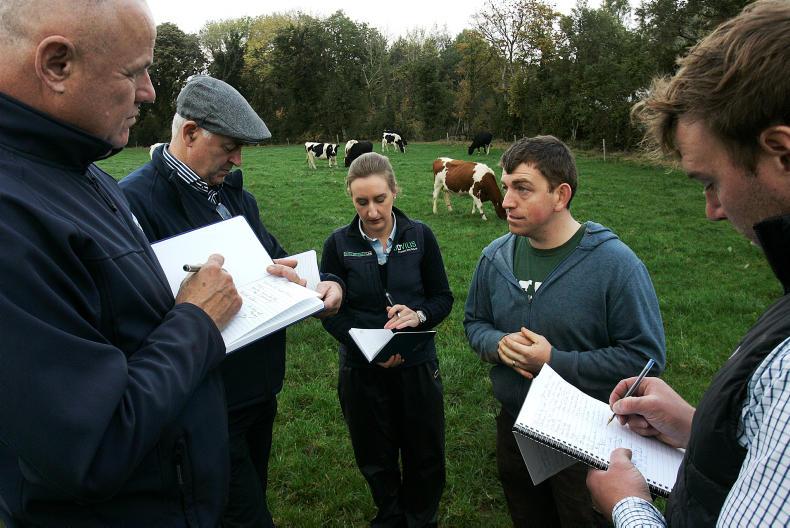 Like a lot of farmers in the region, the Gibson herd is autumn calving, with calving commencing in September and finishing up in early February.

It’s a high yielding herd of Holstein Friesian cows, delivering 9,200l to Lakeland Dairies with an average protein content of 3.94% and 3.35% protein which is a staggering 690kg of milk solids per cow. When the judges visited the farm in mid-October, Stephen had 70 cows going through the parlour, with another 27 dry cows outside grazing.

Stephen places a big emphasis on preventing animal health issues. He is vaccinating the herd against IBR, BVD and leptospirosis. The herd is screened for Johnes disease every quarter, with 30 cows selected for a milk test at each screen. If a cow fails to pass the Johnes test, that cow is not bred again but if she is in calf a different cow’s colostrum is fed to her calf and her colostrum is discarded.

Cows are routinely hoof pared 100 days after calving to identify and correct any issues early, before they become a problem. Calves get 3l of colostrum within the first hour of birth and another 2l at the next feed. Stephen says that he has so far avoided any cryptosporidium or infectious scours in the calf shed. On top of screening for Johnes, Stephen also screens for IBR, BVD, leptospirosis, salmonella, neospora, fluke and worms. He uses the mandatory tissue testing for BVD and has never had a PI calf. Stephen also practices selective dry cow therapy, with any cows with an SCC below 100,000 only getting a teat sealer.

Cows go to grass in springtime when the weather and ground conditions allow. Stephen has a good network of paddocks and farm roadways allowing for rotational paddock grazing. He has a thermometer in the shed and watches this regularly when the cows are in. If the internal temperature is less than seven degrees Celsius the big roller doors are closed and if it is above seven degrees the doors are left open. The Gibson farm is impeccable with nothing out of place. A new cubicle shed for 128 cows was built before the family got into cows in 2012. The shed incorporates the 10 unit swing over parlour and calving pens, making it a very labour efficient set up. The yard is centrally located within the 72 hectare farm. Stephen has breeding tags in the cows which he uses for heat detection and he uses the AM:PM rule when submitting stock for AI.

All replacement heifers on the farm are bred from AI bulls. Last season, Stephen used all sexed semen for the first few weeks and then switched to Hereford AI to get more beef calves. The calving interval is an impressive 383 days and all heifers calve between 23 and 26 months of age. At a high milk yield of 9,200l per cow, Stephen says he has enough milk volume so his focus now is on improving the fat and protein percentages and fertility of the herd.