What causes sudden death in livestock?

Sudden death in livestock has many different causes including, clostridial infections, acute pneumonia, bloat and poisoning.

How do livestock become infected with clostridial bacteria?

Clostridial infections of sheep and cattle are caused by a group of bacteria that exist in soil, on fields, within buildings and even in the tissues and intestines of cattle and sheep. Consequently, improved farm biosecurity measures will be of no benefit in controlling this group of diseases. For much of the time, clostridial bacteria remain dormant and effectively harmless in the form of highly resistant spores that can survive for many years in the environment. But when certain commonly-occurring trigger factors (ranging from changes in management and feeding, through to parasitic activity or trauma) stimulate the bacteria to multiply, then toxins are released that initially cause damage at a local site in the body (e.g. muscle in the case of blackleg) or the liver (e.g. black disease). The toxin spreads quickly in the animals causing rapid death, often within 24 hours.

What does Clostridial disease cost me?

The main direct cost is the loss of the dead animal. Clostridial disease progresses rapidly and is therefore difficult to pick up at
an early stage and treat successfully.

What will I see in the herd/flock that could indicate that Clostridial infection is a problem on my farm?

There are at least 10 major clostridial bacteria responsible for causing various disease syndromes in beef and dairy herds and in sheep flocks. Each present differently but the general overall outcome is sudden death.

Blackleg is caused by Clostridium chauvoei, a bacteria found in the soil wherever livestock are farmed. Individual farms and often individual fields can carry particularly heavy infection. Infection is via exposure to bacterial spores in soil and 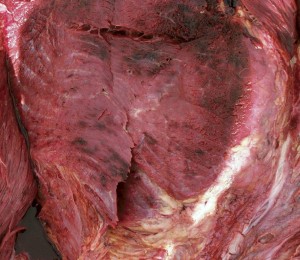 Youngstock between six months and two years of age are usually affected, with most cases occurring at grass. Ewes and lambs around lambing time are particularly susceptible to gangrenous metritis and navel ill caused by C.chauvoei.

The disease in cattle typically affects muscles of the leg and back, and even the tongue or heart. Within 48 hours the animal develops a high fever and if limbs are involved there is often a noticeable swelling (commonly cold to the touch) and the animal becomes stiff and unwilling to move. Death usually follows in 12-24 hours after a period of poor appetite, profound depression and coma. Ewes after a difficult lambing present with a foul smelling bloodstained vulval discharge, stop eating, fail to stand and die. Lambs can also die rapidly. The risk period in cattle  is all year round. The disease is usually triggered by damage to a muscle mass through handling e.g. in a cattle crush, or even muscle damage from bulling. The infection in sheep can often be triggered through shearing injuries at shearing time, poor hygiene and bruised vulvas after manual lambing and undressed navels in lambs.

Cattle of all ages can be affected at any time of the year.

Clinical signs appear within 48 hours of infection. Severe swelling appears at the site of infection and the skin may become darkened. High fever develops and death usually occurs within 24-36 hours. In sheep an initial swelling under the eye is followed by swelling of the head and upper neck, fever, lethargy, loss of appetite and rapid death.

The disease is usually triggered by a sudden wound infection such as a fight wounds in rams and deep puncture wounds (e.g. following the use of a dirty intramuscular injection). Outbreaks may occur after an event that has caused bruising or wounds (e.g. penning for a short period).

Black disease is caused by Clostridium novyi type B, a bacteria that is widely distributed in the soil and frequently present in small numbers in the liver.

Most cattle that contract black disease are found dead, but illness may last for up to 48 hours in some animals. Affected animals become depressed, feverish and reluctant to move. Sheep will fail to get up, breath rapidly and have a sudden ‘quiet’ death. Darkened areas of skin develop rapidly after death giving the disease its name. Liver fluke infection can trigger the disease. Fluke migration causes damage to the liver tissue, which causes a suitable environment for C.novyi type B to multiply producing powerful toxins.

Tetanus is caused by Clostridium tetani. It is a sporadic problem with some farms more susceptible than others. The bacteria is commonly found in the soil and buildings and can live for up to 80 years in spore form. All cattle can be affected but it is generally usually seen in youngstock and sucking lambs.

The time from when the animal picks up the infection to the time it shows signs of disease varies from three days to several months. After initial stiffness the animal develops a fine muscle tremor. The affected animal usually dies from respiratory failure – often following bloat – three to four days after it first shows signs.

Infection can potentially develop after spores from the environment gain access to a deep puncture wound. There is a theoretical risk of infection even after a difficult calving or following surgery, such as castration. In sheep it is associated with infected tailing, castration (including rubber rings) and shearing wounds. Older animals may develop infection from deep, penetrating wounds.

All cattle can be affected at any time of the year.

The time from when the animal picks up the infection to the time it shows signs of disease varies from a few hours to two weeks. Symptoms include restlessness, inco-ordination and difficulty swallowing. Muscle weakness and paralysis leads to a failure to be able to stand with early cases often mistaken as milk fever.

Most cattle will die, although slaughter on humane grounds is often required.

Sheep show signs of stiffness, ataxia (staggering/inco-ordination) excitability, and ‘head-bobbing’ followed by salivation, nasal discharge, breathing difficulties and rapid death. Affected sheep will often develop an arched back with a drooping tail, head and neck in the early stages.

Toxins produced by the bacteria in foodstuff is then eaten by the animals. Outbreaks are often associated with the ingestion of poultry litter. Big bale silage and vegetable waste are also theoretical risks as is contact with infected carcase material, such as dead rats/mice/birds in feed.

‘Sudden death syndrome’ is caused by Clostridium sordellii. One to two year old cattle are particularly affected, the highest risk period being Autumn and Winter.

Cattle develop moderate to large swellings on limbs with accompanying lameness within 18-20 hours. They become reluctant to move with death usually occurring within 24-48 hours.

Sporadic cases of abomasitis  (inflammation of the stomach) in young calves have been reported in which this bacteria appears to be the main cause. Sheep develop abomasitis which usually occurs in lambs and older animals develop toxaemia (blood poisoning). This disease is often mistaken for either calcium or magnesium deficiency around the time of lambing.

Bacterial redwater (Bacilliary haemoglobinuria) is caused by Clostridium haemolyticum. The spores of this bacteria are soil borne, present especially on wet swampy land likely to harbour the host snail of the liver fluke. Youngstock are especially prone during summer and autumn. The disease in sheep is associated mainly with upland farms and is sporadic in nature. Adult sheep are affected August to March.

Affected cattle stop feeding, ruminating and passing dung. Cows in lactation may suffer a dramatic drop in milk yield and present a high fever. Other signs include anaemia (pale gums), rapid breathing and dark red urine. Death occurs rapidly. Affected sheep often have a stained fleece due to the discoloured urine and die within 48 hours.

The bacteria can be found in normal livers, however, pre-existing liver fluke infection or other liver damage can trigger the disease.

Enterotoxaemia Cattle infected with Clostridium perfringens type D (occasionally type A, rarely types B and C) or Clostridium sordellii present with sudden death or occasionally a severe, often blood-stained diarrhoea in the early stages of the disease. These bacteria are present in the gut of many young animals.

At any time of the year young calves to yearlings can be affected and the disease is more likely to occur in artificially reared calves.

Change of diet or greedy feeders, dirty feeding equipment (e.g. buckets), lack of colostrum and other pre-existing diseases of the intestine can all trigger the disease. 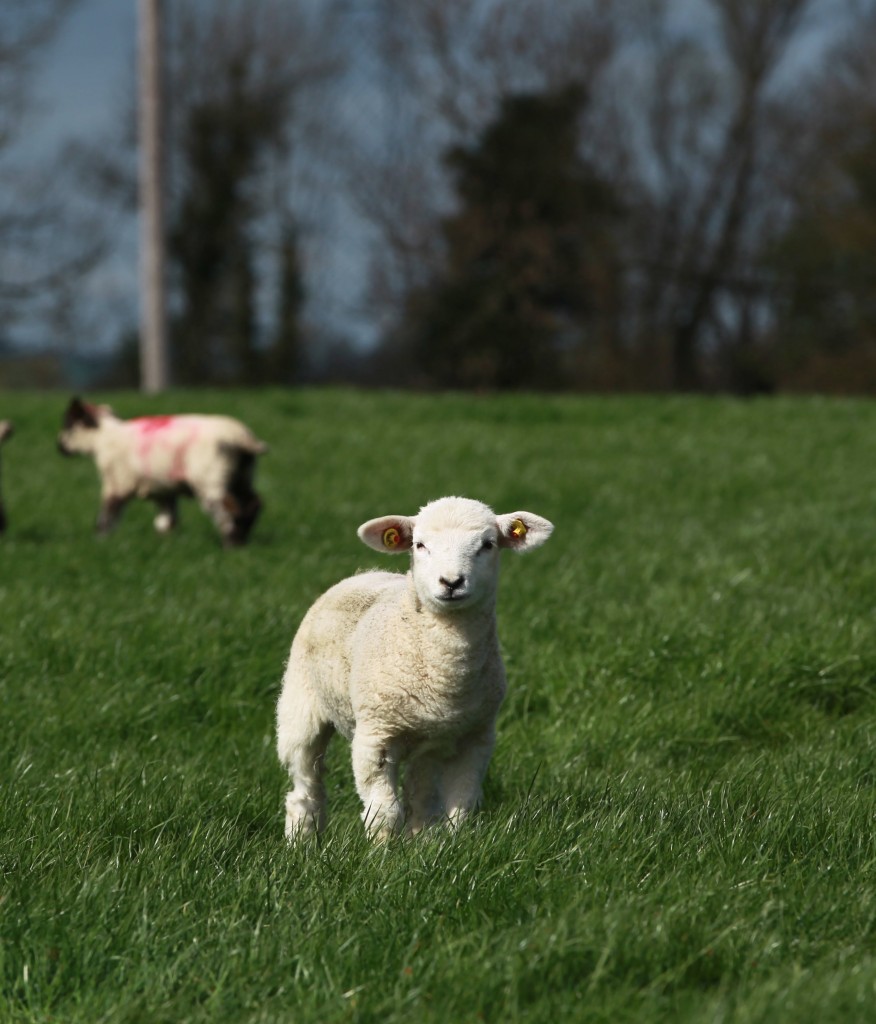 Aside from those listed above sheep are also prone to four other recognised disease syndromes caused by clostridia bacteria.

Lamb dysentry is caused by Clostridium perfringens type B, commonly found in the lambing environment and ingested by the sucking lamb from contaminated teat. The disease is usually seen January to May when lambs are anything from a few days old up to three weeks of age.

Lambs lose appetite, lie away from their mothers and may develop a blood stained scour. Death occurs between two hours and three days from onset of symptoms.

Over-sucking and distended bellies will trigger the bacteria to multiply and produce toxins, and hence losses are most likely to occur in single lambs from good milking ewes. Good hygiene practices will reduce the threat of infection.

This sudden death presentation is seen at grass in young adults of one or two years old from February to May or  6-8 month old finishing lambs in the Autumn. A sudden change of diet, nearly always as a result of a switch from poor to lush grazing, causes the bacteria to multiply and release toxins and it may also be associated with fluke infestation at the same time.

Pulpy Kidney, the most common clostridial disease of sheep, is caused by C.perfringens type D, a bacteria commonly found in its dormant state on grass and in the gut of sheep. All sheep are at risk all year round but the disease is often seen in lambs of six weeks to one year old.

Sheep show signs of ataxia (staggering), collapse and convulsions. Sudden death occurs, usually within two hours of onset and losses can be extensive.

A sudden change of diet, such as turning sheep onto significantly better grass or the introduction of high levels of concentrate feed, can trigger the disease.

Braxy (Bradshot) Braxy is caused by Clostridium septicum. This bacteria is commonly found in the gut of sheep and in the soil, particularly where autumn crops are sown.

Typically young sheep in their first autumn and winter are affected. Sheep are lethargic, separate themselves from the flock and often collapse, go into a coma or die suddenly. The disease has been associated with eating frosted forage or roots. The frozen forage then causes inflammation of the stomach (abomasitis) and triggers the disease.

With sudden death generally being the outcome of clostridial infection, treatment of these diseases – except in the very early stages – is disappointing and rarely effective.

However, clostridial diseases in cattle are perfect targets for vaccination. The fact that the bacteria and spores are everywhere – including their presence in normal healthy animals and the speed and unpredictability with which disease develops – means vaccination is the only practical control option. Good management will help to reduce the impact of the trigger factors, but good management alone will never be enough.

Wherever sheep are farmed it’s important to consider the risk of clostridial infection and disease. Unfortunately, the rapid onset of these diseases means that intensive treatment using antibiotics is also rarely effective.

However, protection can be achieved by using a broad-spectrum vaccine to provide animals with the necessary antibodies to combat all the strains of clostridia mentioned in the clostridial disease syndromes.

Not all pack sizes may be marketed.

Clostridial disease progresses rapidly and is therefore difficult to pick up